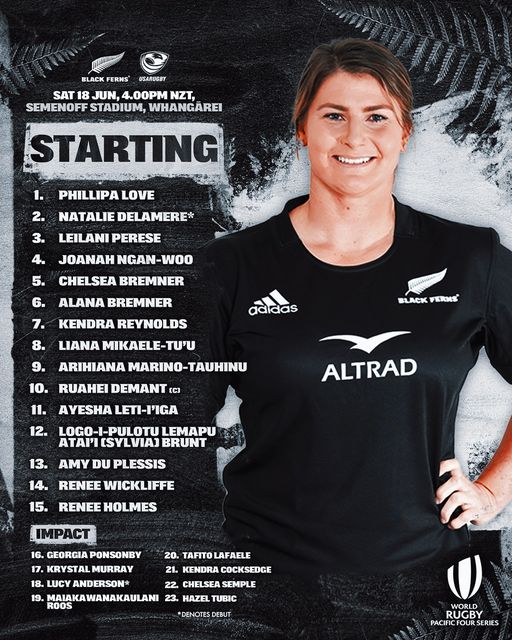 Natalie Delamare and Lucy Anderson are both in line for their Black Ferns debut tomorrow, named in the match-day 23 for the team’s final Test of the Pacific Four Series against USA in Whangārei (kick off 4pm).

Black Ferns Director of Rugby Wayne Smith has made good on his promise to give every squad member an opportunity this series, with front rowers Leilani Perese and debutants Natalie Delamare and Lucy Anderson named for their first match in the Pacific Four Series.

Bay of Plenty hooker Natalie Delamare (25) makes her debut in the number two jersey, just two months on from scoring a hattrick in the Super W Final for the Waratahs.

31-year-old Occupational Therapist, Lucy Anderson, is set to make her long awaited debut off the bench tomorrow, having first trialled for the Black Ferns as a midfielder in 2013.

“To have genuine competition for spots has got to be good. We have 11 debutants and they’ve all played really well when they’ve had their opportunity. For Nat and Lucy, it will rely on the rest of the team how good their debut is, they can’t go out and really shine unless the others go out and shine; I’m pretty sure they will,” said Smith.

Marino-Tauhinu will don the number 9 jersey, having played her previous seven Tests behind Kendra Cocksedge, who will play her 60th Test off the bench. Perese is one of the most capped forwards in the current squad, but all her previous appearances have come from the bench.

After a solid debut performance last weekend, teenager Sylvia Brunt is promoted into the starting line up in the number 12 jersey, while Chelsea Semple returns from illness onto the bench.

Smith said the preparation this week has been focused on continuing to grow the Black Ferns style of play.

“We need to focus on getting our stuff right. Everyone can see the sort of game we are trying to play and its starting to come together.”

Off the back of a gutsy win against Australia last week, Smith expects another strong performance from USA.

“Clearly USA will be a good challenge for us, and we will need to be spot on to meet that challenge. We need to make sure we are getting all the detail right and can’t let winning become the enemy.”