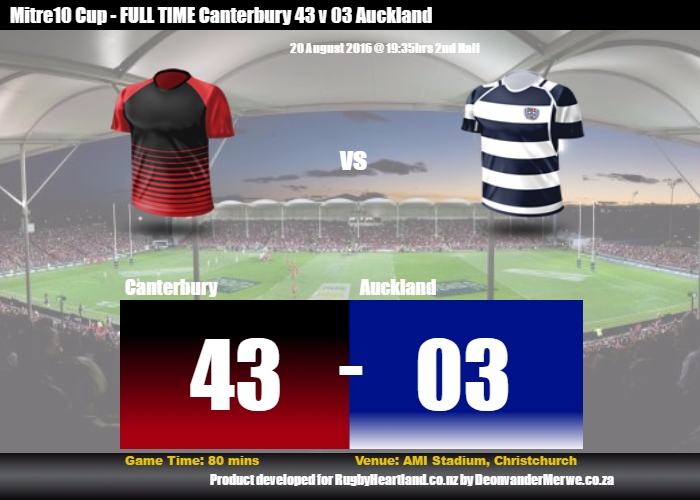 Canterbury kicked off their provincial championship defence by swamping Auckland 43-3, a record loss, in their Mitre 10 Cup opener at AMI Stadium in Christchurch on Saturday.

It surpassed by one point the 42-3 win achieved by Canterbury over Auckland in 1973 and introduced several new players to maintain the impressive record Canterbury has built in the competition in the last decade.

Any thoughts this might be a repeat of the close final played out last year were quickly dispelled. Canterbury arrived to play, were quickly into top gear and kept the foot down while Auckland looked shambolic at times. Their defence was uncompetitive and high tackling was matched by high body positions in contact play which played into the hands of the home side who used their upper body strength to break through weak efforts.

There was an untidiness, and indiscipline, about Auckland who failed to make the best use of what ball they did have and invariably they were found out at the breakdown. The firepower they contained in Rieko Ioane at centre and Melani Nanai at fullback was never unleashed largely due to the poor quality of ball which was feasted on by the Canterbury defence.

Nanai didn’t help himself when sin-binned for a dangerous tackle on centre Jack Goodhue, eight minutes before half-time.

Scoring their four-try bonus point before half-time, Canterbury added a fifth one minute into the second half when wing Johnny McNicholl ran into the line at a lineout, from the blindside, and broke the initial line and then left the sole defender in his tracks.

That typified much of the night as the Canterbury side were ruthless in their efficiency and finishing.

It was all about using the ball and putting players into space. Halfback Mitch Drummond was deadly accurate in long, flat passes across the bow of the defences, his first effort finding second five-eighths Rob Thompson and put first five-eighths Richie Mo’unga over in the eighth minute.

Cohesion in the lineout drive produced the second for Canterbury as hooker Ben Funnell was given the perfect vehicle to trundle over the line and midway through the second half Funnell’s substitute Nathan Vella repeated the dose with ease.

Centre Jack Goodhue impressed with the directness of his running and it was his break that opened up the defence for McNicholl to score his first in the 32nd minute.

Then good old-fashioned support play, with any one of a number of players capable of scoring, but the honour went to blindside flanker Reed Prinsep.

It appeared, when both sides introduced their substitutes that the shape disappeared from Canterbury’s game while Auckland still couldn’t find the magic formula to take advantage to put more points on the board. 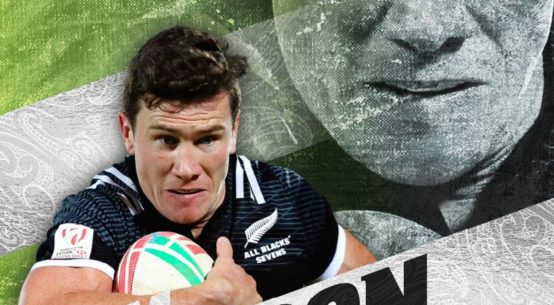