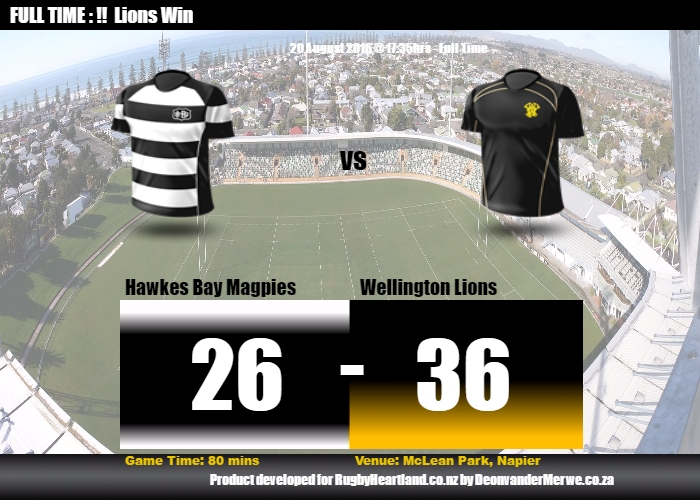 Wellington got their Mitre 10 Championship bid off to a dazzling and winning start when beating Hawke’s Bay 36-26 in Napier on Saturday.

Wellington fielded a lot of new blood in their side and the demonstrated some new intent in a riveting display which saw them reverse a 10-12 half-time deficit.

Hawke’s Bay wouldn’t concede but the buffer Wellington built in the third quarter was the difference between the sides and that was down to the control shown by Wellington first five-eighths Jackson Garden-Bachop.

He began with a first minute penalty goal and then nine minutes later he made the most of a break by wing Joe Hill. Garden-Bachop stayed on the outside of Hill after he ran back infield and while his pass didn’t go to hand, it rebounded off Garden-Bachop’s knee and over the line where he won the race to touch it down.

Wellington had more reward when flanker Galu Taufale was able to take a cross field kick from replacement back Pakai Turia to score with Garden-Bachop adding a fine sideline conversion. Then Hill crossed in the corner after unleashing some fancy footwork to secure a 29-12 lead.

Halfback Brad Weber was introduced from the bench and injected some momentum for Hawke’s Bay in the final quarter. It produced results in the 70th minute from a lineout in the Wellington 22m area when he broke at speed and from the breakdown it was lock Geoff Cridge who picked the ball up and found the defence missing in action to score.

But any hope of a late Hawke’s Bay revival was undone by a remarkable breakout from No.8 Hoani Matenga who chipped ahead and regathered only to be tackled just short of the line. Centre Matt Proctor ran onto the ball at speed and fed skipper and flanker Greg Foe over in the corner.

There was still time for Bay wing Ryan Tongia to demonstrate he had lost none of his hunger for tries with a remarkable effort running around looking for an opening and then slicing through beneath the pots. But it was too late.

Earlier Bay left wing Mason Emerson’s refusal to be knocked down when coming in from the blindside wing created the opening try. He bounced back from the tackle attempt and drove ahead into the Wellington 22m area.

The forwards charged in and when the ball emerged first five-eighths Ihaia West had the defence bearing down on him as he set to take the pass. But he flicked the ball on one-handed and that saw second five-eighths Billy Ropiha take the ball with a head of steam to charge into the gap and over in the 18th minute.

Wellington had reward after introducing young prop Alex Fidow. After pressuring the Bay defence and gaining a five-metre scrum when the ball was carried back, Wellington drove to the line and it was Fidow who got the TMO’s verdict to score a 33rd minute try to claim the lead with Jason Woodward’s conversion.

But a West midfield bomb three minutes later created havoc in the Wellington defences and when Wellington let the ball bounce it was No.8 Faaelimiga Selesele who controlled the ball one-handed to grasp his chance and race 25 unchallenged metres to score.

Selesele almost scored on the half-time hooter from a five-metre scrum but Proctor was on blindside defensive duty and held Selesele up to deny the try.