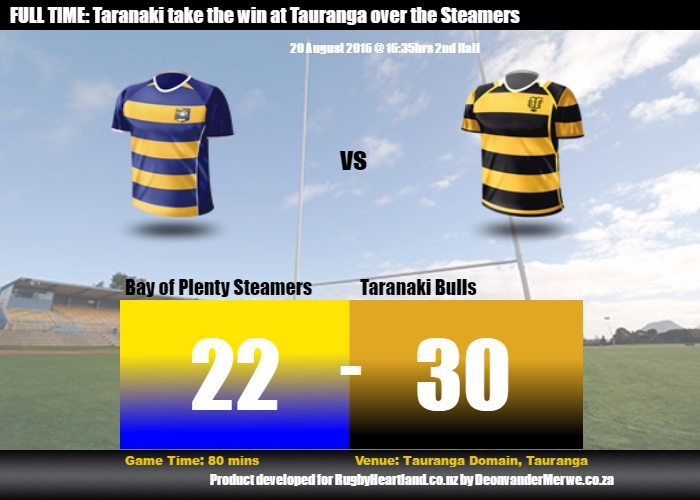 Taranaki got their 2016 Mitre 10 Cup campaign off to a winning start but it didn’t happen without a late fright in Tauranga.

Last year’s Premiership semi-finalists looked to be in complete control at 21-0 up before Bay of Plenty sparked into life in front of their home crowd. The last 20 minutes belonged to Bay of Plenty but in the end it was the boot of dead eye fullback Marty McKenzie that proved the difference as Taranaki got home 30-22.

Taranaki came into the match with a lot of talk surrounding their exciting backline, but it was their forward pack that set up the first try. After a succession of strong scrums on the Bay of Plenty line, second five-eighth Johnny Fa’auli crossed for an easy try as the Steamers scrum conceded what would have likely been a penalty try had the try not been scored.

The home side began to work their way back into the game, with replacement first five-eighth Kelly Haimoana guiding the Steamers around the park before Taranaki flanker Bernie Hall made it 14-0 with a well taken intercept try.

That was to be it for the second half as the stoic Taranaki defence thwarted any Bay of Plenty offence.

Taranaki added their third – and best – try early in the second half to make it 21-0. Livewire halfback Te Toiroa Tahuriorangi sparked a great interchange of passes as he put Fa’auli in space down the short before receiving the ball back from Marty McKenzie to dot down for the try.

With 20 minutes left on the clock, Taranaki’s desire for a bonus point win quickly turned into holding on for victory as Bay of Plenty stormed back with three tries.

The first was scored by centre Lalakai Foketi when he was driven over from close range to put the home side on the board. Moments later replacement outside back Te Rangi Fraser pounced on a no-look Taranaki pass to run in for an intercept try.

With the score at 24-12, Marty McKenzie attempted to halt the Steamers momentum with a penalty but the home side scored again when powerful number eight Joe Tupe barged over to close the gap to 27-22.

Marty McKenzie had a solid game at the back for Taranaki and topped it off with a long range penalty to prevent Bay of Plenty from picking up a much deserved bonus point.

Taranaki captain Mitchell Croswell said: “We were pretty fortunate to hang in there in the end. Bay of Plenty fought back well so we will need to address how we play in the last twenty minutes”