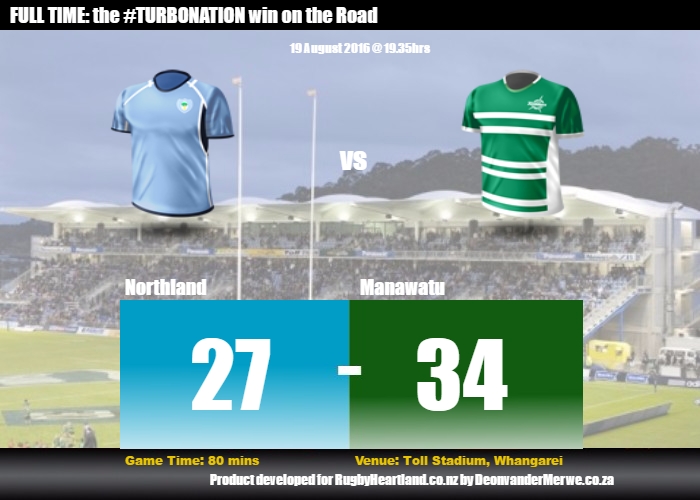 Manawatu fullback Jason Emery’s 76th minute try gave his side a thrilling 34-27 win over Northland in the Mitre 10 Cup game in Whangarei on Friday.

Manawatu were able to bring their experience off the bench for the final 30 minutes of the contest and it paid off, especially with first five-eighths Otere Black providing a settling influence that saw Manawatu maximize their chances in spite of being down on possession over the game.

It was his accurately-placed kick to Ambrose Curtis’ right wing that allowed Manawatu to draw level, after he landed a superb sideline conversion.

Then replacement halfback Jamie Booth broke from the base of a ruck 22m out to set up a key chance in the goalmouth where the ball was spun wide for fullback Jason Emery to stretch out in the tackle and ground the ball.

It was tough for Northland’s livewire openside flanker Kara Pryor who was unrelenting in his play in the loose in an outstanding display.

What had seemed to be shaping to a Manawatu romp as they scored at a point-a-minute rate in the first 20 minutes, was turned around when Northland stormed back with some exhilarating rugby.

Manawatu had scored first when second five-eighths Ngani Laumape in the 10th minute courtesy of good backing up while in the 17th minute captain and No.8 Heiden Bedwell-Curtis made the most of a fine Manawatu midfield scrum to pick up the ball, throw a dummy pass and then retain the ball and set sail for the posts 25m away.

Northland had suffered early on with a lack of continuity and the time taken for Pryor to adjust to the law variations being trialed during the season. He conceded several early penalties. But once attuned he had a significant effect in the second quarter.

Firstly, from a penalty kick to the corner and the resulting lineout, Northland probed back and forward across the goal-line before flanker Michael Faleafa marked his debut by corkscrewing across the line for the try. In the process Manawatu centre Hamish Northcott was sin-binned and Northland made merry in the meantime.

Running the ball from their own 22m, as a result of a fine break by fullback Solomona Alaimalo, a loan player from Canterbury, which saw him link with Pryor who slipped a pass back outside to centre Warren Dunn to complete a stunning movement.

Three minutes later Pryor, out among the backline, slipped a kick toward the outside where wing Joni Macilai secured the ball, flicked in inside where Faleafa was on hand to take the inside ball to score.

Manawatu first five-eighths Sam Malcolm reclaimed the lead a minute into the second half with a penalty goal.

But Manawatu were unable to build on the lead and Northland regained more impetus heading into the last quarter. Replacement hooker Jordan Olsen was held up over the line and from the resulting scrum halfback Sam Nock ran from the base and found replacement loose forward Jack Ram on hand and he scored.

Black helped take charge for his side in the last stages of the game and it was his crossfield kick to right wing Ambrose Curtis that saw him score in the corner in the 70th minute allowing Black to level the scores with a fine sideline conversion.