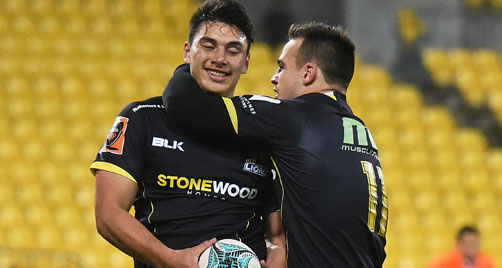 Wellington continued their upward drive in the Mitre 10 Cup Championship with a 24-10 win over Bay of Plenty at Westpac Stadium on Friday.

Strong home defence was needed as Bay of Plenty, especially in the middle stages of the second half, mounted some strong assaults but were unable to peg back the advantage Wellington built during the first half.

Wellington made light of miserable conditions when playing into the swirling wind in the first half. It was a night for keeping the ball close which was Wellington did to good effect with a lineout drive option after a penalty and a lineout.

Goodes was then out in the midfield for a superb run as Wellington moved the ball and while there wasn’t an immediate reward for the break it came soon after when from a ruck, first five-eighths Jackson Garden-Bachop lobbed a perfectly-weighted kick into the arms of fullback Peter Umaga-Jensen to take Wellington out to a 12-0 lead.

While Bay of Plenty had opportunities, none better than after a scything break by halfback Luke Campbell, they weren’t able to see off the Wellington defence where flanker Brad Shields had a big game, with great assistance, especially in mauling play from lock Mark Reddish.

But that effort was immediately negated when Wellington lock Sam Lousi created an opportunity with a powerful break with the ball in hand which put Garden-Bachop into space and he put his speed to use to break the defensive shackles and pass to wing West Goosen for the 21st minute try.

Five minutes before the break Campbell set up another chance for Bay of Plenty but wing Monty Ioane was ruled not have grounded the ball by the TMO.

Lousi was prominent during an extended burst of 19 phases from Wellington as they returned from the break. He made two strong runs, the second of them a cork-screwing run which set up Goodes for his second try.

Bay of Plenty did gain some reward for some solid scrummaging work and it allowed first five-eighths Dan Hollinshead was able to slip a left-footed grubber kick towards the posts where second five-eighths Terrence Hepetama followed up for the 53rd minute try.

The enthusiasm of the visitors picked up as they brought on their substitutes and they began to create opportunities only to see them lapse due to discipline issues that allowed Wellington some defensive freedom through penalty clearances. And on a later occasion after a powerful scrum put all manner of pressure on Wellington, a lineout resulted from the resulting penalty.

But lock Shahn Eru wasn’t able to secure the ball, albeit with the rain sheeting down, and Wellington were able to run the ball off their line through replacement Malo Tuitama and by maintaining their hold on the ball they were able to kick for goal from a penalty, but the weather had the final say.