Canterbury overcame a brave Waikato side to lift the Ranfurly Shield for a record equalling 15th time with a 29-23 win in Hamilton. 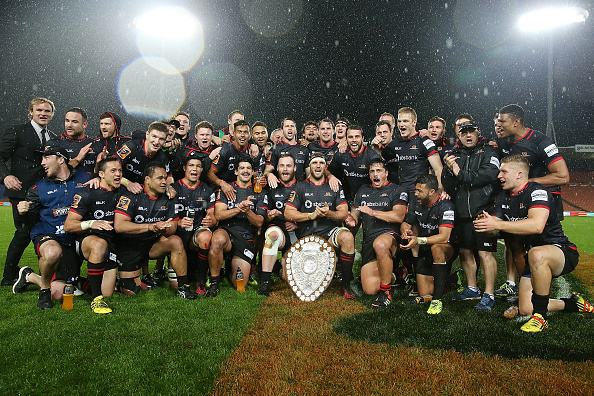 Despite defending the Ranfurly Shield proudly in 2016, Waikato knew they had to lift a gear to have any chance of repelling the challenge of the Premiership leaders and did that by crossing for three tries to Canterbury’s two. But like all great teams, Canterbury poured the pressure on Waikato and took points at vital times through the accurate boots of Richie Mo’unga and Jordie Barrett.

The game was in the balance in the final 10 minutes, but Waikato couldn’t get their hands on the ball as the experience of veteran halfback Alby Mathewson and Captain Luke Whitelock closed out the game for Canterbury. The win signals Canterbury’s first successful Ranfurly Shield challenge since 2010 and brings the curtain down on a six match reign from Waikato.

After trailing 3-0 early, Waikato conjured a try out of nothing when slippery wing Illiesa Ratuva drew two defenders and off loaded to blindside flanker Jordan Manihera to run in down the sideline.

While the try offered Waikato hope, it seemed to fortify Canterbury who responded with another Mo’unga penalty and a try to Ben Funnell from a lineout drive to take the score to 13-5.

There was a feeling that Canterbury would take control at this point like they have done so often this season, but there is nothing like the Ranfurly Shield to inspire a team under pressure.

Just like their first try, Waikato created another try out of nothing when Sam Christie chipped over the flat Canterbury defence to put young fullback Jordan Trainor in space. Trainor showed great speed to open up the Canterbury defence before putting Captain Whetu Douglas over.

Unfortunately for Waikato, they conceded a try to Johnny McNicholl almost instantly to close out the half with the challengers up 20-12.

Waikato needed to start the second half well and did that with a mixture of strong defence and great ball control to close the gap to 20-18 through two Jordan Trainor penalties.

After soaking up a long period of Canterbury attack, Waikato would have been satisfied just conceding three points before Willis Halaholo showed his class. The Investec Super Rugby winning midfielder pulled Waikato level when he drew the Canterbury defence before floating a perfectly timed ball for Ratuva to go over in the corner.

The cowbells were soon silenced though as Jordie Barrett knocked over two penalties to give Canterbury the six point advantage which they never looked like giving up.

Next up for Canterbury is Taranaki in New Plymouth on Sunday before North Harbour travel south to challenge for the Ranfurly Shield on Friday 7 October.

The loss has left Waikato at fifth on the Premiership ladder and making every game a must win if they are to make the playoffs.