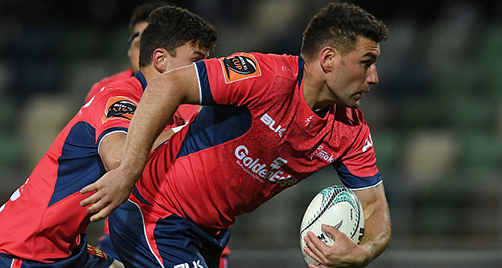 Tasman dug deep to secure a vital 15-10 win over Counties Manukau and keep their Premiership playoff hopes alive in Blenheim.

With just six points separating four teams in the middle of the congested Premiership ladder, Tasman knew a loss would spell the end of their semifinal aspirations while a victory for the Steelers would have propelled them into second place. Tasman took the big Counties Manukau pack on upfront and capitalised on the Steelers ill-discipline in the tackle and breakdown area to knock over five Marty Banks penalties to secure the hard fought win.

Counties Manukau kept trying throughout and had a number of chances to score but lacked the clinical finishing they have shown earlier in their campaign as Tasman held on in the high stakes encounter.

It was clear from the outset that Tasman were attempting to tire out the big Counties Manukau pack by keeping the ball alive and pinning the corners. The tactic looked to be working well with Tasman up 9-0 through three Banks penalties after 25 minutes before the Steelers flexed their attacking muscle.

In what was to be the only try of the tight encounter, the big Counties Manukau pack rumbled towards the Tasman line before halfback Augustine Pulu skipped a long ball to Jimmy Tupou to crash over out wide.

The half was closed out with penalties from rival pivots Banks and Piers Francis to make it 12-10 to the home team at half time.

The pressure kept rising in the second half as Counties Manukau made a number of attacking raids into the Tasman half but just couldn’t finish their opportunities. Missing Kane Hames upfront, Tasman held firm in the scrum as recent All Blacks Pauliasi Manu and Hika Elliot bolstered the Steelers from the bench late in the half.

It took until the 70th minute for the first points to come in the second half when Banks landed a crunch penalty shot from 40 metres out to extend the lead to 15-10.

Counties tried hard to steal the match in the dying stages but the Tasman defence held firm to the delight of the Blenheim crowd.

For Counties Manukau, centre Sam Vaka was a constant danger with ball in hand but was let down by the finishing of his outside backs.

Tasman Captain Alex Ainley said: “We know they are a big forward pack and see them as the leaders in the competition so we decided to take them on. We never really felt like we had the chance to attack though but got the penalties and the win so that’s all that counts.”