For 79 minutes there was little to separate Otago and North Harbour until Bryn Gatland landed a clutch drop goal to secure the Championship title and a place in next year’s Premiership for North Harbour.

In a bruising encounter at Forsyth Barr Stadium, Otago and North Harbour played out a classic final with water tight defence keeping the score board close throughout the entire match.

It was North Harbour’s first final since 1994 but the early signs weren’t good when livewire Otago wing Fa’asiu Fuatai crossed in the corner after a relentless period of attack. The ball was stretched both sides of the field before Fuatai found space out wide to secure the early lead for the home side.

The signs looked even more ominous when Otago swept straight back onto attack and attempted to rumble over the line. All North Harbour could do was to collapse the maul and receive a yellow card as loose forward Glen Preston was sent to the side for 10 minutes.

Otago turned down the chance for three points but were penalised themselves soon after to let the visitors off the hook. With a man down, two of North Harbour’s biggest stars combined when Tevita Li broke through two tackles to feed second five-eighth Michael Little to complete a determined finish in the corner.

With both teams up fast on defence and making their one-on-one tackles, scoring opportunities were limited between but Otago chose to turn down a penalty shot for the second time and were once again were let down by their lineout execution to come up empty handed.

North Harbour closed out the half with two Bryn Gatland penalties to take the unexpected 11-7 lead into the break while Otago were left to rue their missed opportunities.

Just like they did in the semifinal against Wellington, North Harbour came out strong early in the second half and converted their territorial advantage into points when Gatland landed his third penalty to make it 14-7.

With the handy lead, North Harbour looked to play the game in Otago’s half but Michael Collins pounced on an aimless kick to put the home side onto attack. With more numbers at the breakdown, Otago crashed over close to the line when lock Tom Franklin barged over to square up the score 14-14.

In the 60th minute, 38-year-old veteran Andrew Hore came on at hooker for his 311th first class match. Hore’s introduction heralded an intense final quarter as the defence lifted from both sides with halfback Jonathan Ruru making a number of steals in the tackle and Michael Little showcasing his increasing stature with some punishing hits.

With the score tied up in the 79th minute, North Harbour showed great composure to work the ball deep into Otago’s half before Bryn Gatland landed the clutch drop goal from 30 metres out to secure the Championship title and a place in the Premiership for 2016. 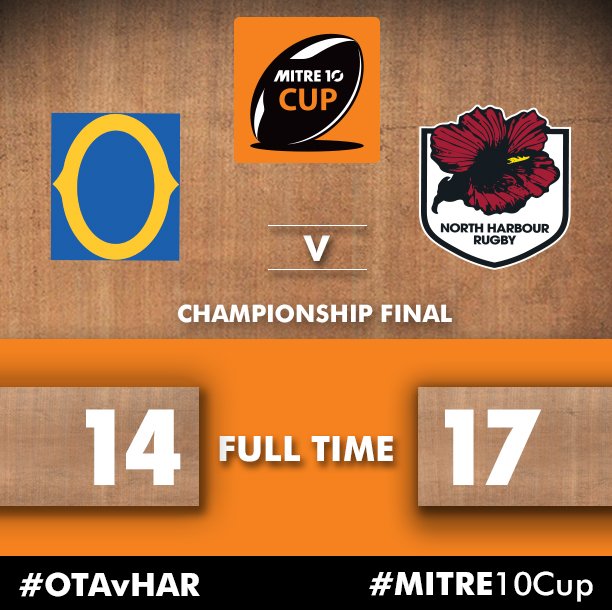 Second heartbreak at the death for Counties Manukau