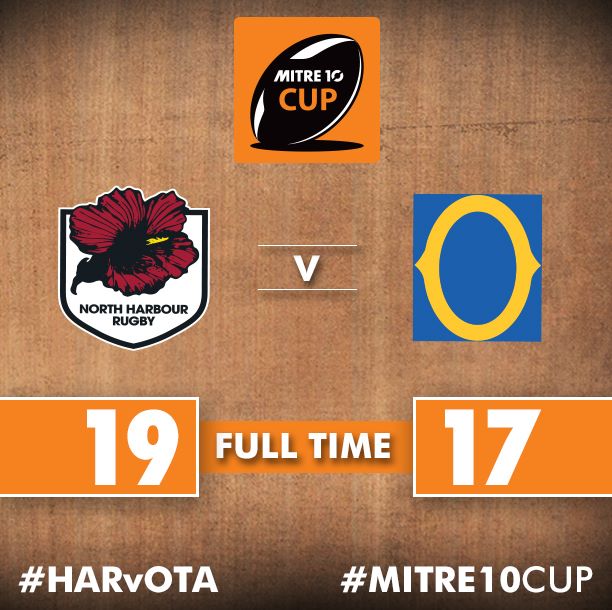 The old cliché ‘a game of two halves’ couldn’t have been more apt as North Harbour clung on for a crucial 19-17 first round win over Otago in Albany.

There was only one team in the game in the first 40 minutes as North Harbour went into the break 16-0 up with Otago barely firing a shot. The southerners came storming back in the second half but fell agonisingly short as North Harbour dug deep to repeat their 2016 Championship final win over Otago.

The first half was a scrappy affair with Otago in particular guilty of poor ball handling in the wet. North Harbour were led astutely by Bryn Gatland at first five-eighth whose tactical kicking kept Otago pinned in their own half for large portions of the half. Gatland broke Otago hearts last year with a last minute drop goal in the Championship final and proved to be a thorn once again for Otago with a flawless first half in the wet. The talented young pivot slotted three long range penalties and found a gap in the Otago defence to set up Shaun Stevenson for the only try of the half to make it 16-0 at half time.

Otago lacked cohesion in the first half and slipped to 19-0 down early in the second half when they were caught offside and punished by another Gatland penalty.

With a handy lead on the board, North Harbour were guilty of sitting on their advantage as their intensity dropped as the rain subsided at Albany Stadium.

Otago found a spark when youngsters Jonathan Ruru and Josh Ioane came on at halfback and first five-eighth. It took 55 minutes for Otago to get on the board through a close range penalty but then Ruru and Ioane ran their capers around the North Harbour defence to set up a grandstand finish.

Tries to Ruru from a well worked set-piece move and Mitchell Scott off the back of a Ioane skip pass closed the gap to 19-17 with 10 minutes to play.

But there was to be no sweet revenge for Otago as North Harbour showed great discipline to defend their half in the final ten minutes and pick up a vital win.

For North Harbour, Tevita Li was an unsung hero with some great work in the air and a number of scything breaks to show that he will be a player to watch in 2017.