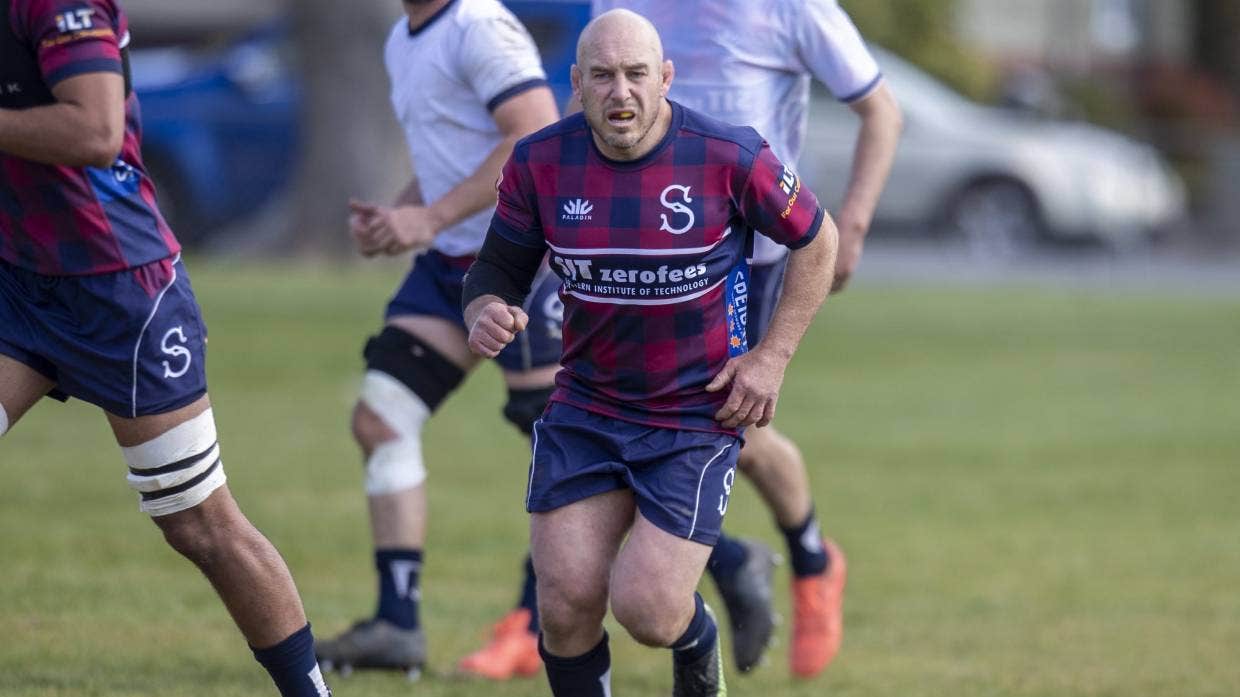 As if Jason Rutledge’s folk hero status in Southland needed any more fuelling.

Twenty years after making his Southland Stags debut the Invercargill plumber has yet again answered an SOS call.

The 42-year-old front-rower has been named on the bench for Southland’s competition opener against Hawke’s Bay in Invercargill on Sunday.

He’s replaced Talemaitonga Tuapati who has been ruled out with a finger injury.

If Rutledge is used off the bench on Sunday he will become the oldest player to play for Southland.

He’ll topple utility back Isaac Jenkins who played the last of his 22 consecutive seasons for Southland as a 40-year-old in 1908.

Just eight other players in New Zealand were older than Rutledge when they played a first-class game. Many of them playing either early last century or in the lower Heartland divisions.

For the record, A.E Wood holds the New Zealand record after he played for Hawke’s Bay at age 48 in 1911.

While Rutledge, who turns 43 in December, admits the oldest Southland player tag isn’t a record he has chased, he does acknowledge it would be a nice feat.

“If you can get a name in a book it’s pretty cool for my kids or my grandkids to look and see Dad’s name there, or whatever. It is special.’’

At 139 caps, Rutledge already has his name etched in the Southland record books, in regard to the most games for the provinces.

Game No 140 will add to Rutledge’s already remarkable sporting tale.

As a teenager in the 90s, Rutledge gave up the sport because of concussions problems before a few years later easing himself back into rugby.

By 2000 he made his Southland debut as a 21-year-old and played through to 2014 when he looked to have penned the final chapter to his Stags story.

But in 2016 the then 38-year-old answered an SOS call from then Stags coach Hoani Macdonald who wanted to add a bit of steel to the pack.

By the end of the season, it was job done and people started to reflect on his career as if it again had come to an end.

The former Highlanders Super Rugby player has remained a key figure with the Woodlands Rugby Club in Southland circles and has never hoisted the retirement flag on his provincial career.

When reflecting on his career with Stuff just last month Rutledge said he remained available to take a call from Stags coach Dale MacLeod’s.

That call came on Sunday providing him with an unexpected Father’s Day present.

He had helped out by carrying the water for the Stags preseason game on Saturday and got an inkling there Tuapati had a problem with his finger but didn’t think too much about it.

“Dale rang and said, ‘what’s the chances of you coming in on Tuesday?’ It was a pretty cool phone call. I didn’t really know where that would end up….. but I tried to juggle work to get along and it’s worked out alright.’’

His longevity in the game is highlighted by the fact some in the Stags squad he has been training with this week weren’t born when Rutledge debuted in 2000.

Probably the most excited person of all about Rutledge’s call up is his youngest son Sabin.

“He is still trying to take it in. Gregor [Rutledge’s oldest boy] has been in a lot of Stags and Highlanders changing rooms over the years and had some pretty cool times but Sabin wouldn’t have known what was going on at that time.

“So to get the opportunity for Sabin to come along and hopefully see Dad in a Southland jersey, that’s pretty cool.’’

Sunday’s game in Invercargill will kick-off at 4.35pm.