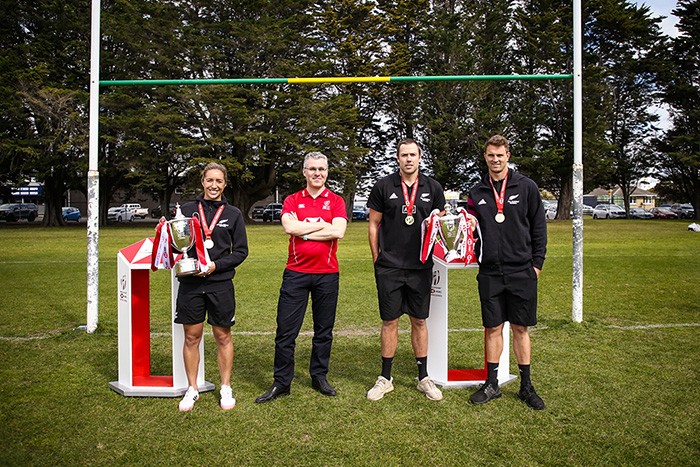 All Blacks Sevens and Black Ferns Sevens players have received their World Series winning medals, trophies and a slew of awards announced by World Rugby today.

The season was called off earlier this year due to Covid-19 and with the New Zealand teams leading the standings in both men’s and women’s competitions they were declared Series winners. It is the first combined victory since 2014.

As well as receiving gold medals and the series trophies, individual player awards were also announced, with Stacey Fluhler the big winner.

Nathan-Wong was also recognized for becoming the second women’s player to score 1000 series points with the UL Mark of Excellence.

“It’s not quite the same as being in Paris to receive the awards but its really important, given what’s happening at the moment, that we take a moment to celebrate what has been achieved.”

All Blacks Sevens Coach Clark Laidlaw echoed Sweeney’s sentiments, reflecting on the team’s last tournament in Vancouver in March and getting home just a week before borders were closed.

“This year has been surreal. We were playing well, won three of the six tournaments and made another final, so it feels a bit strange winning the World Series when we didn’t get to finish the season but in saying that we are extremely proud of how we prepared and played.”

With the borders still closed there is some uncertainty around upcoming scheduling, but Laidlaw said there are promising plans coming together.

“Getting back playing overseas will be tricky but we are excited about some internal sevens later in the year, Oceania are working really hard to create tournaments at the start of next year and hopefully the World Series will be back up and running in April,” said Laidlaw.

The majority of contracted players are currently involved in the Mitre 10 Cup and Farah Palmer Cup, Sweeney said it is great to see players getting game time.

“Our players will be learning new things from other coaches and players so we’re excited about what they are doing in terms of their development and what they will bring back into this environment,” said Sweeney.

Border hang on for victory