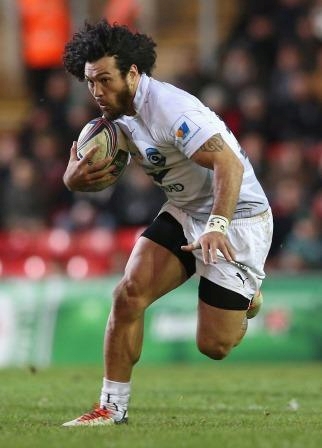 Explosive attacking back Rene Ranger is to return to the Blues in 2016 and will be available to play for North Harbour in the ITM Cup this year.

The 28 year old has gained an early release from his contract with French club Montpellier after two seasons.

Ranger scored 25 tries in his 65 Investec Super Rugby caps for the Blues and played six All Blacks Tests. He has become a fan favourite with Jake White’s Montpellier side, scoring six tries in his 15 games to date, with the team enjoying success in the European Club Championship this year.

He said his return to New Zealand was primarily for family reasons.

“Family comes first and that is the big motivator to return. I want to be able to help my Mum more,” Ranger said.

Once the decision was made, it was not difficult to seek out the Blues.

“I started my Super career with them and they have always been close to me. JK (Blues coach Sir John Kirwan) has always backed me and motivated me to be my best.”

He was excited about the prospect of returning to a team he believed was on the improve.

“They are a quality side, but execution is letting them down so far. Hopefully I can play a positive role because backs get excited with the sort of front-foot ball the Blues are getting.

“I will come home a better rugby player. I am mentally stronger and I’ve learned a lot that I can bring back into the Blues environment.”

Ranger was also firmly focussed on again pushing for an All Blacks spot in the future.

“He’s a classy player with the ability to surprise and that makes him a favourite of fans. He will have learnt much from his time in France and is sure to be an exciting draw card for the Blues and North Harbour.”

Sir John Kirwan said Ranger’s return would bolster the team with star-quality on the field and a fan-favourite off it.

“Rene made his mark on the game in this country as a remarkable attacking player, always able to break tackles, often when there was nothing on,” Kirwan said. “His experience in Europe will have helped further round his skills and add to his experience. With the likes of Charles Piutau, it will give us a potent attacking unit.”

North Harbour gains Ranger
Ranger will return to New Zealand after his commitments in Europe, and will join North Harbour for the ITM Cup.

While Ranger said he remained a Northlander at heart, the key to his decision was the desire for his family to be based in one place.

“Last time I travelled from Northland and lived on my own. Our family wants to be together in one place and from that point, I have decided to play for North Harbour.

“They are a young team trying to build and that is something new and challenging for me.”

North Harbour coach Steve Jackson was excited by Ranger’s decision, and said the Montpellier player would add considerably to his backline.

“He is a quality footballer and he has that X factor. He will provide real leadership to the backs off the field and on it he has the ability to break open a game at any time.”

Ranger will return mid-year to ready himself for the ITM Cup.