Taranaki have made it three wins from four games in the Mitre 10 Cup with a well compiled 30-14 win over Southland in wet and windy conditions at Yarrow Stadium.

With a storm lashing the country, ball control and territorial kicking were always going to be two of the keys to winning this clash. Taranaki did both well while Southland kept toiling but lacked the continuity and tactical nous of the home side.

Sitting at the foot of the Championship ladder and without a win in 2016, Southland needed to start strong but were stunned when Taranaki crossed after just seven minutes. Taranaki centre Sean Wainui showed great line speed to charge down a Greg Dyer clearance kick and pick up the loose ball to score.

Playing with a strong wind at the backs, Southland gained the territorial advantage in the first half but could only add three Greg Dyer penalties as the Taranaki defence held firm to claim a 13-9 lead at halftime.

Just like the first half, Taranaki scored early to put Southland on the back foot. While their first try was against the run of play, the second strike was anything but. Showing great continuity, the Taranaki forward pack worked patiently towards the Southland line before former Queensland Reds lock Ben Matwijow crossed to make it 20-9.

Taranaki’s halfback-first five combination of Te Toiroa Tahuriorangi and Marty McKenzie relished the chance to play with the wind and kept Southland pinned in their own half for most of the second half. When Taranaki got possession in Southland’s half they were patient and steady. Their third try was similar to the second when replacement loose forward Lachlan Boshier crashed over on the back of a steady build up from the pack.

At 30-9 down, Southland managed to get some continuity and grabbed a well-deserved try when 37-year-old veteran prop Jason Rutledge crossed from close range. Rutledge’s try was to be the final score of the match but didn’t alter the result as Taranaki claimed the 30-14 win.

Taranaki’s win was a win built on an all-round forward display and a strong tactical performance from the halves combination. Marty McKenzie was also impressive from the tee with a perfect six out of six for a personal tally of 15 points.

For Southland, prop Peni Ravai was impressive with his strong ball running getting Southland over the gain line. 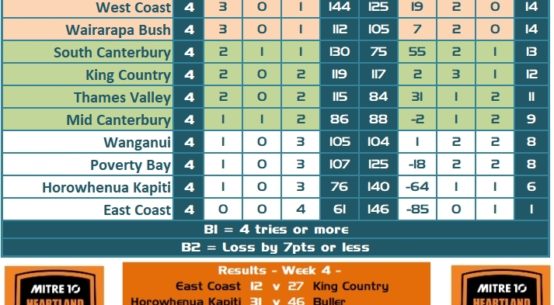