The 2016 Mitre10 Heartland Championship season has once again shown how important this competition is, in the fabric of the New Zealand rugby culture.

CHECK out the Full article with Stats/Images
in the latest Hardcopy of RUGBYNEWS (NZ) edition {12 Dec 2016 , available at News Agency Outlets}

Wanganui once again showed their provincial might in securing their 5th Heartland title as they went on their first unbeaten campaign since 2008. They continue to develop and nurture upcoming stars of the future with Te Rangatira Waitokia leading the try scoring list with 12 tries for the season clearly out in front of the chasing pack. He follows in the footsteps in recent years of Waisake Naholo and more recently Stephen Perofeta who were both picked for the Butcher Boys at a young age and have gone onto higher honours. He has showed that the pathway in Heartland Rugby is there for all to achieve.

The Meads Cup Final though at Cooks Garden in Wanganui was a game that will be looked at in the future as a classic Final. The conditions were perfect, the teams were ready, albeit the question was would Buller overturn a 28 nil loss to Wanganui during round-robin play, and the consensus was yes, with a team boasting well over 800 provincial caps the experience of big time rugby came to the fore as the men from New Zealand’s smallest union took it to the reigning Meads Cup champions who themselves were looking at repeating their back to back performance from 2008-09 seasons.

They had the leading points scorer in James Lash who was directing the Buller backs to put pressure on the Wanganui line , Andrew Stephens with 95 games under his belt guided a pack that would easily go down in New Zealand folklore as one of the most experienced packs seen on a NZ field of play, and pressure that did apply leading 18-10 with only a quarter of the match to go an upset was on the cards until the composure of the Wanganui juggernaut finally got their game going and when Craig Clare scored a his 11th penalty of the season to bring it back to 12-18 the game was there for the taking .

They came back in a 10-phase play they saw centre Blake Hohaia’s sheer determination get him through the defence before finding lock Gavin Thornbury on his inside and with an unimpeded path to the goal-line to score the try which, when converted by Clare, gave Wanganui a 20-18 lead with 10 minutes remaining.

Buller came back in the final 10 minutes pressuring the Wanganui defence which saw two penalties conceded and as if pre-ordained, James Lash saw both attempts miss and the Butcher Boys managed to hang on to secure the undefeated season and the back-to-back Meads Cup titles.

In the Lochore Cup we saw a repeat of the 2015 Final, same teams, same venue, same passion.

After King Country and North Otago missed the cut for the Meads Cup they turned their focus on the Lochore Cup , and King Country knew that a win over Poverty Bay in Taupo in the Semi Final would see them once again host a provincial final , a final that they would have thought would see Mid Canterbury take the road trip to Te Kuiti , but the Old Gold’s of North Otago smarting from their final round-robin loss to West Coast by an all time record score for the Red & Whites, North Otago were defiantly not considered by many to overcome the hosts in Ashburton, but overcome they did and securing their ticket to the final winning the semi-final 36-24.

So as they traveled for the third week in a row that saw them travel to Greymouth, Ashburton then Te Kuiti, the Old Gold’s must have drawn on their pre-season trip to Canada and dug deep to travel for one more time.

After the record 4-4 draw  in Te Kuiti 4 weeks earlier , in atrocious weather conditions the match was saw both sides wanting to seek redemption and in front of the two legendary icons of New Zealand Rugby Sir Colin Meads and Sir Brian Lochore , North Otago run out to early lead and a healthy 24 – 08 lead over King Country .  After the break King Country got the early score required when James Hemara was on the end of a well timed pass from Stephan Turner that saw him cut back infield and beat 3 defenders to cross over for the try. But then prop and captain of North Otago played his part of the final that saw the front row forward deliver a great pass to Lemi Masoe who then provided Matthew Vocea the ball to see him cross over to take the steam out of the Rams fightback.

Two more tries followed to Simon Lilicama and Craig Smith for the Old Goals as they secured the Lochore Cup 44-22 in a match that could have gone either way, which was until the miracle pass from Ralph Darling who in the end lifted the Lochore Cup and take it back to Oamaru. 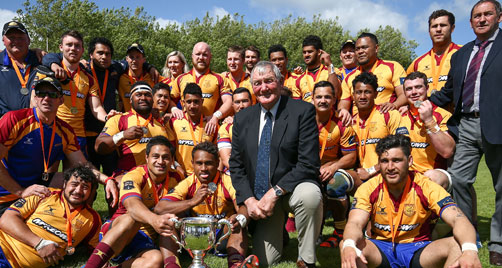 Young Players to watch in 2017

With the development of young talent in the Heartland Championship we believe that 3 players stand out above the rest.

Tasman get home at last gasp over Waikato