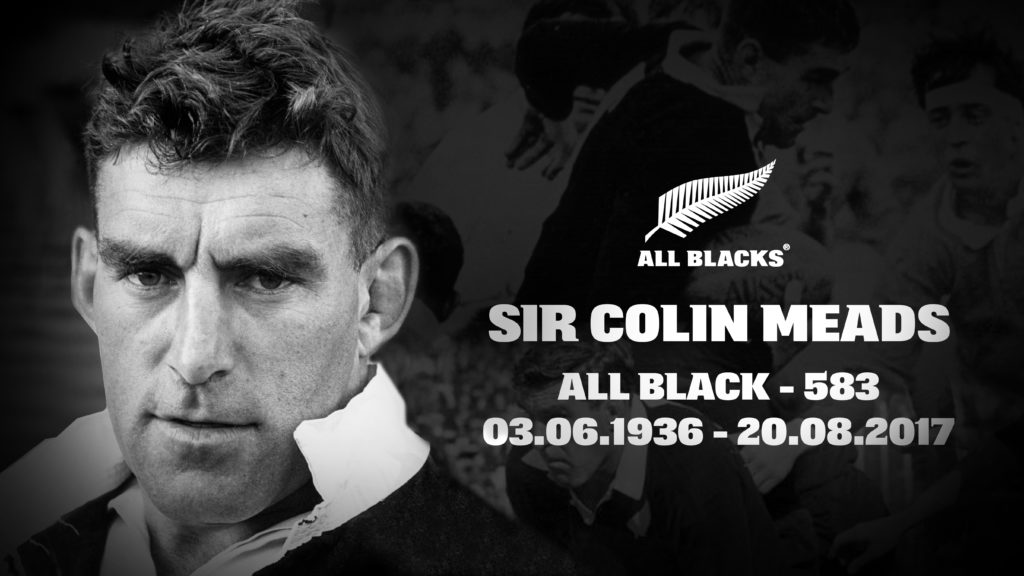 New Zealand Rugby (NZR) will honour the legendary Sir Colin Meads with special tributes this weekend at Heartland Championship games through to the All Blacks Bledisloe Cup Test match in Dunedin.

All Blacks lock Sam Whitelock, who shares the number 5 jersey with Sir Colin, will gift his playing jersey from this weekend’s Test match to the Meads family. Another special tribute by the team will be revealed on Saturday night.

Both Bledisloe Cup teams, and those attending the match at Forsyth Barr Stadium will acknowledge Sir Colin’s recent passing by observing a moment’s silence.

All Mitre 10 Cup and Mitre 10 Heartland Championship matches this weekend will observe a moment’s silence, and in addition some teams will acknowledge Sir Colin in their own way. The New Zealand Rugby Board will remember him with a moment’s silence before their meeting tomorrow.

The Black Ferns, who are currently playing in the Women’s Rugby World Cup, wore black armbands in recognition of Sir Colin during their semifinal victory over the USA on Wednesday.

“This week we have seen an amazing outpouring of love and gratitude for the contribution that Sir Colin made both to rugby and to the community. It has been heartening to see so many people share their memories and stories, including rugby friends from all over the world who have sent their acknowledgements.

“It’s an appropriate mark of the status of the man that all provincial championship games up and down the country will pause this weekend to honour Sir Colin’s memory,” said NZR Chief Executive Steve Tew.

“Sir Colin has played a unique role with All Blacks teams through the decades. He has been a constant source of inspiration to the current team and their acknowledgment of him on Saturday in Dunedin will be a heartfelt occasion.

“Sir Colin was a true legend of our game and there has been an outpouring of emotion both inside and outside the rugby community since his passing on Sunday. It’s only fitting to pause and reflect on the true giant he was and recognize his contribution to both rugby and the country.”

The ode to spoken before matches this weekend :

Ladies and Gentlemen – this week, we lost one of our greatest New Zealanders – Sir Colin Meads.

As a living icon, Sir Colin received almost every honour the game could bestow.   He played 133 games for the All Blacks over 14 years, including 55 Tests, and 11 as captain.  He was a physical and uncompromising player who epitomized the nation and the rugby of his era. He was one of the best and most inspiring players the world of rugby has ever known.

Meads played 18 seasons, and 139 times for his King Country side, and led the combined Wanganui-King Country team to victory over the 1966 Lions side.

The man we affectionately knew as “Pinetree” was also a loved husband, father, grandfather, loyal patron and mate.   New Zealand Rugby and the Rugby community would like to express our heartfelt condolences to the Meads’ family and we now invite you to join us, the teams and rugby communities across New Zealand in sharing a moment’s silence for the great Sir Colin  Meads.