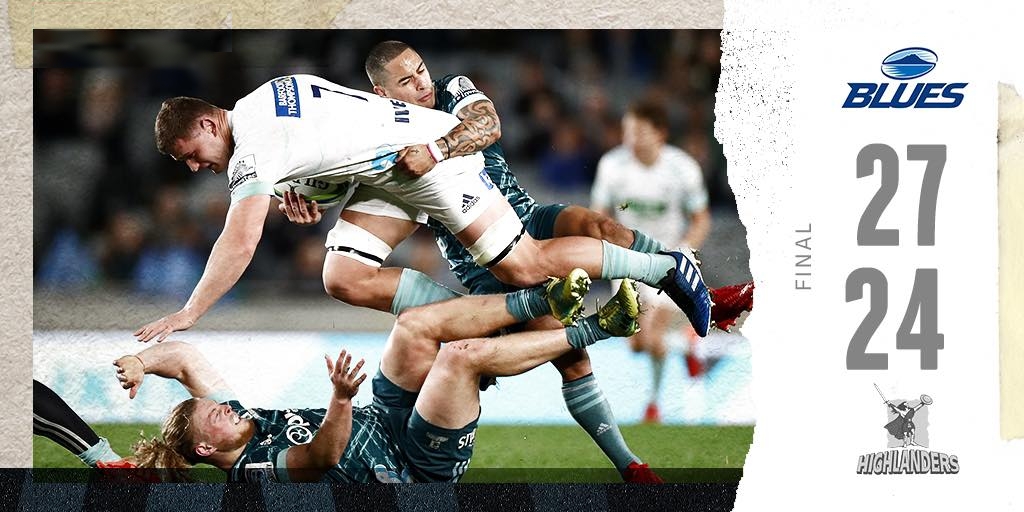 Under pressure from a determined Highlanders second-half effort, the Blues produced defensive class to match their attacking strengths to claim a 27-24 win in their Super Rugby Aotearoa game at Eden Park in Auckland on Saturday.

It made it three out of three for the Blues who have the bye in the fourth round while the much-discussed penalty count was down to 17 for the game, six conceded by the Highlanders and 11 by the Blues.

Down 10-22 at halftime, the Highlanders claimed a 24-22 lead before the Blues utilized their lineout drive for flanker Dalton Papalii to score his second try.

The Highlanders had two late chances to score, first five-eighths Mitch Hunt missing a penalty goal chance while from a lineout penalty and drive at the Blues’ line, they were undone by the outstanding No.8 Hoskins Sotutu, who got his hands on the ball and denied the release to win a turnover scrum.

It was a game effort by the Highlanders, but the Blues also deserved credit for holding fast under the sort of pressure to which they would have succumbed in previous seasons.

Sotutu was outstanding and continued his growth in stature but of concern for the Blues was the way they fell off the quality of their first-half display in the second half.

Superb control by halfback Sam Nock laid the foundation for the Blues’ opening try, five minutes into the contest. He slid a grubber kick through to the corner and from the lineout, lock Josh Goodhue secured the ball. Prop Alex Hodgman, who was strong all night, was driven back in a strong tackle, but when play went left before returning right, Hodgman was this time able to break the defence and set up the ruck which saw Nock slip the ball to left-wing Caleb Clarke who was in a stand-off position to drive over and score.

Some frenetic work from the Highlanders ensured an effective response. Twice big wing Sam Gilbert made ground on the end of the line. From the second time, he set up a goal-line ruck which saw hooker and captain Ash Dixon stationed off the ruck and able to power over for a 10th minute try.

Barrett joined the line from the restart and slipped a kick deep into the Highlanders’ territory. Visiting fullback Scott Gregory tidied the ball but in taking his time the Blues defenders applied pressure with Sotutu charging the kick down and Papalii pouncing to score in the 22nd minute.

Failing to secure ball proved costly for the Highlanders with Clarke making a breakout wide near the halfway line, and then feeding centre Rieko Ioane who was unchallenged in scoring in the 27th minute.

Playing under scoreboard pressure affected the Highlanders in the latter stages of the half with turnovers mounting with seven to three by the Blues. The home side also had more running opportunities, carrying the ball for 275m compared to 84 for the Highlanders.

Halftime produced the effect the Highlanders wanted and it took an untidy turnover by Nock to give them a chance which No.8 Marino Mikaele Tu’u took with interest to give his pack impetus which was carried on by lock Paripari Parkinson to set up a ruck in the Blues 22m area.

The ball was moved quickly and Hunt stepped the line and raced in for a 43rd-minute try.

It appeared replacement wing Ngane Punivai crossed after some fine work by replacement prop Jeff Thwaites after just coming onto the field but a TMO inspection detected a knock-on at the ruck by Hunt.

However, the review showed Rieko Ioane was offside and he was yellow-carded. The Highlanders took the lineout option and from a midfield drive, it was flanker Shannon Frizell who drove over to give the Highlanders a 24-22 lead.

Recovering from a loss of momentum the Blues benefited when a kick into the visitors’ 22m area resulted in Hunt being caught with the ball and then penalized. The Blues kicked to the corner, worked their lineout drive and then had Papalii go over for his second of the night.