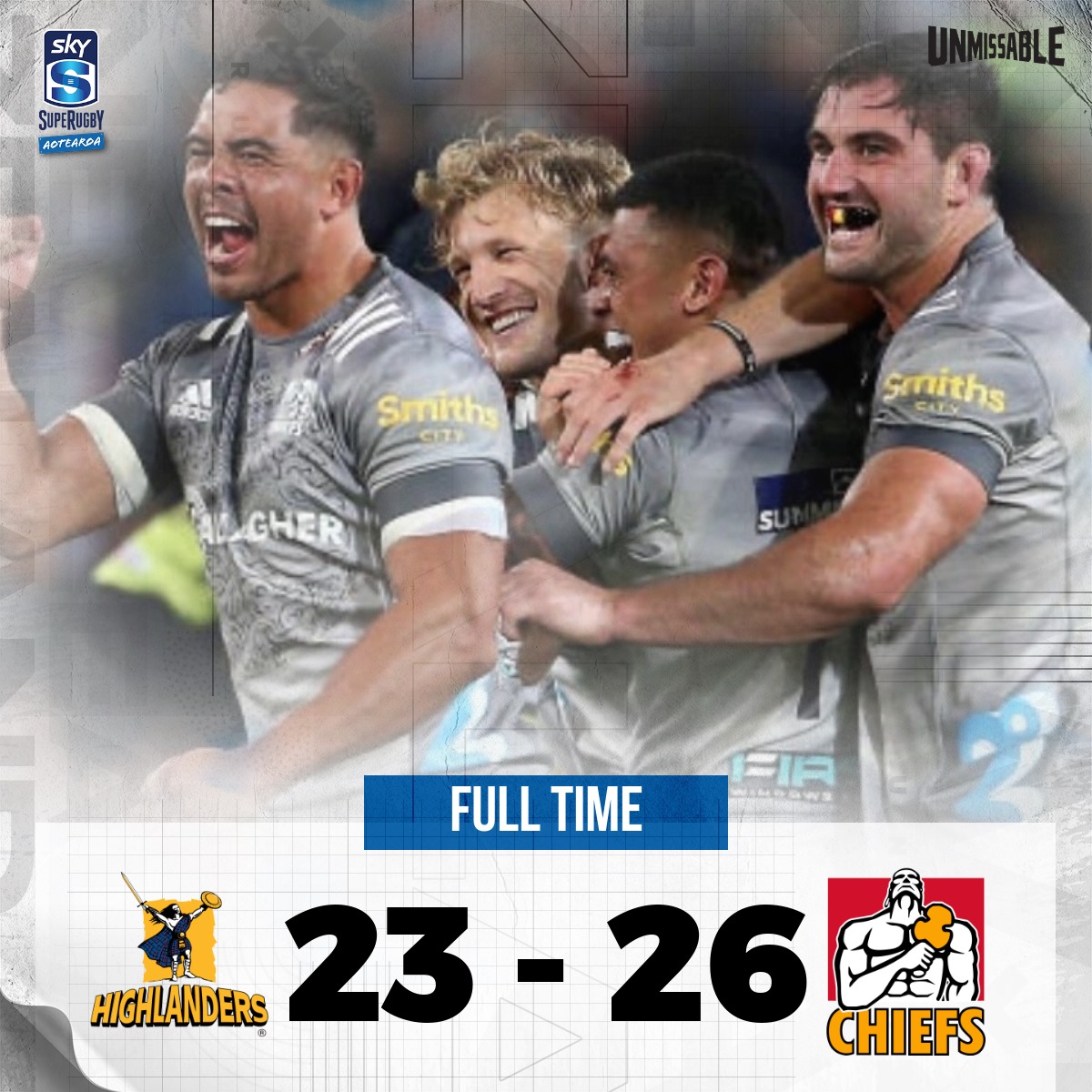 All Black Damian McKenzie provided the goal-kicking difference to land an extra-time golden point penalty goal to give the Chiefs a 26-23 win over the Highlanders in Dunedin on Saturday.

He kicked 16 points but two late shots, a dropped goal and a penalty goal, in normal time missed, and the game was the first in two years of Super Rugby Aotearoa to go to golden point. It also ended a run of losses to the Highlanders by the Chiefs.

It was a game that reflected their proximity on the points table, and the importance they both attached to the win.

Discipline was always going to be a factor and while the Chiefs conceded more penalties 12-11, they fared better in the goal-kicking department.

First five-eighths Mitch Hunt, a key performer in the win over the Crusaders a week earlier, took 53 minutes to find his goal-kicking range, by which time McKenzie had found the posts four times.

That allowed the Chiefs to call the tune on scoreboard pressure throughout and while the home team, looking to build on their upset win over the Crusaders last week, drew level at 13-13, another penalty goal for the Chiefs was followed by No8 Luke Jacobson carrying the ball hard and providing an opening for centre Anton Lienert-Brown.

The All Blacks centre took play to the line and from the ruck it was prop Angus Ta’avao who lumbered over for the try that looked to take the sting out of the Highlanders’ hopes.

However, on a night where their innovation kept them in the hunt, especially in their lineout variations, the Highlanders came back when replacement five-eighths Josh Ioane crossed for the try, converted it and then added a penalty goal to level the scores at 23-23.

The need for discipline was evident within the first moments of the game when both teams conceded tries as a result of their transgressions.

Centre Sio Tomkinson for the Highlanders and Chiefs lock Naitoa Ah Kuoi, infringed. That saw Chiefs wing Etene Nanai-Seturo score after the Chiefs worked a lineout, and fed off a strong break by flanker Kaylum Boshier, and powerful work by second five-eighths Quinn Tupaea that allowed halfback Brad Weber to snipe around the blind to give Nanai-Seturo his chance.

The Highlanders responded from a lineout option as well, but they kept it simpler, working a switch after flanker James Lentjes received the ball from the top of the lineout, fed a dummy to the outside before peeling around the front of the lineout to catch the Chiefs napping to score in the ninth minute.

However, in a half that developed into ultimately unsuccessful, from a try-scoring point of view, thrust and counter-thrust, both sides also missed several chances to progress their scores from penalty goals. The deadlock was finally broken when McKenzie landed a penalty goal just after the halftime hooter.

Another penalty given away, this time by Jacobson, a minute into the second half, allowed the Highlanders to play a lineout just short of the Chiefs’ 22m. A long throw found second five-eighths Scott Gregory. He took the ball into the tackle where a quick release saw the ball moved on the short side where lock Bryn Evans fed a short ball to outstanding blindside flanker Shannon Frizell.

Demonstrating his ability with ball in hand, as he had several times already in the game, he found space and halfback Aaron Smith running into a gap in support to take the pass and score to level the scores.