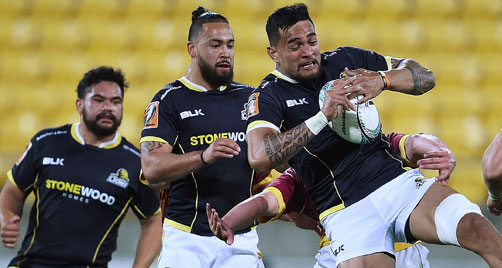 Wellington highlighted the difference between the talent pools of main centres and provincial bases when hammering Southland 60-21 at Westpac Stadium in the Capital on Friday.

It was a disappointing night for the southerners who ran into a rampant Wellington team able to throw the ball around to allow the bright and promising youngsters to play with a freedom all too rarely available at this level.

Wellington were one short of equaling their highest score against Southland achieved in a 61-3 win in 1999.

Southland had cause to be frustrated because there were times when they showed skills only to be undone by poor handling and passing and by basic mistakes that were too easily punished by a side like Wellington.

Southland scored the first try after eight minutes when halfback Jahvis Wallace celebrated his first start by running off the back of Southland’s second attempt at a lineout drive and finding the Wellington defence on holiday.

However, a mistake at an attempted scrum move was costly for Southland as Wellington halfback Tomasi Palu was onto the ball in a flash, He fed out to Garden-Bachop and he in turn found blindside flanker Vaea Fifita looming up inside him at speed to take the pass and score in the 15th minute.

Wellington second five-eighths Wes Goosen looked sharp in his new position and it was his break that set up a sequence of drives that resulted in flanker Greg Foe scoring in the 21st minute.

Wellington loosened up and lost some shape after scoring two quick tries midway through the first half but a Southland breakout inspired by fullback Junior Ngaluafe saw play into the Wellington 22m. A knock-on looked to have occurred but play was allowed to carry on and in the resulting play wing Jason Woodward made an intercept and cleared out to score. However, the TMO was asked to judge and the knock-on was called.

From the resulting scrum in the 27th minute, first five-eighths Wharenui Hawera beat Garden-Bachop and fullback Peter Umaga-Jensen hands down with his sidestep.

Wellington responded immediately after more impressive control allowed Garden-Bachop to slip a grubber kick into the goalmouth where centre Matt Proctor dived on the ball for the try.

Goosen was on hand to capitalize on a breakout from Wellington’s half to score in the 33rd minute and then four minutes later Woodward embarrassed the Southland defence with a 60m run along the sideline to score to give Wellington a halftime lead of 38-14.

Southland’s passing and handling problems were highlighted in the first 10 minutes of the second half when they moved the ball left and right but too often had passes going astray and eventually it caught up with them when a tackle turnover was punished when wing Malo Tuitama was able to score the first of two tries in the 59th minute and then benefited when chasing onto a good kick through from replacement fullback Mike Lealava’a in the 69th minute.

In the meantime two other replacements hooker Asafo Aumua and flanker Galu Taufale picked up tries to ram home the difference, the Taufale try coming when the ball was left at the base of the Southland scrum with replacement Jimmy Cowan unable to grab it before Taufale got his hands on it and cleared out to score in the corner.

That summed up Southland’s night. But there was a consolation prize when wing Keanu Kahukura got over the line after the final hooter.