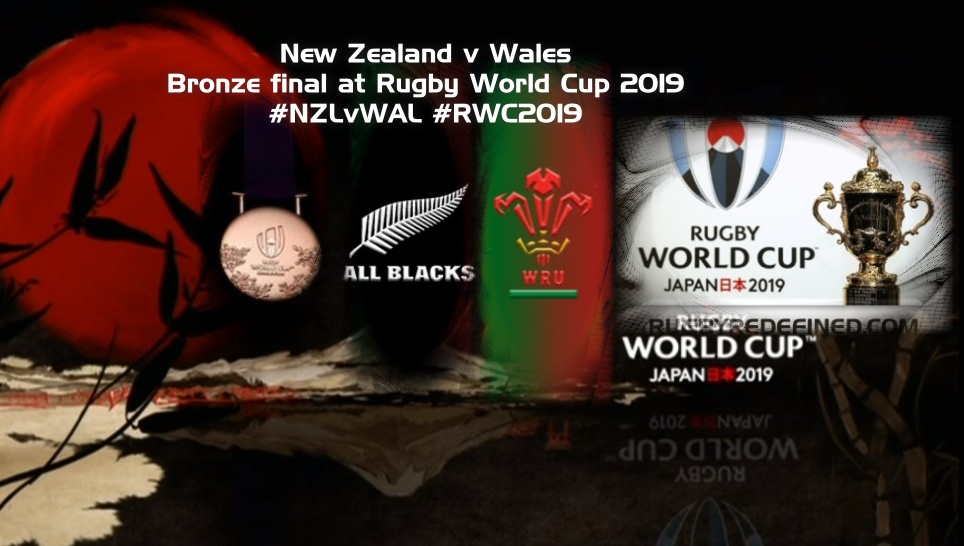 TOKYO, 31 Oct – A preview of the bronze final between New Zealand and Wales, which kicks off at 18:00 on Friday at Tokyo Stadium.

The Big Picture
Nobody is pretending that two teams still hurting so badly after their weekend semi-final defeats will find it easy to rouse battered bodies and broken hearts for the game they had so desperately wanted to avoid.

Yet there are compelling reasons to believe that New Zealand and Wales, guided by their two master Kiwi coaches, will be driven by rugby history, national pride and the need to honour departing heroes to serve up one last monumental effort at RWC2019. It promises to be a night for tears, whatever the result.

New Zealand’s Steve Hansen and Wales’s Warren Gatland, who coached against each other in the British and Irish Lions tour to New Zealand in 2017, pictured above, will depart their respective posts after this match as, statistically, the most successful coaches these two great rugby nations have ever boasted.

Then there’s the great Alun Wyn Jones. Just as all of New Zealand will hope their old warrior Read will be able to bow out in the grand manner in his 127th test, Wales will be willing on their skipper, as he passes Italy hero Sergio Parisse to become the second-most capped international in history on his 143rd test appearance.

It would be fitting if Jones was to be the leader on the night when Wales ended that infamous run of 30 successive defeats to New Zealand since the 1953 triumph at Cardiff Arms Park, but scolded All Blacks have a habit of storming back ferociously after any defeat.

The loss to England, however, was not just any defeat, it was their most humbling in any World Cup, so Wales can expect the intensity of the response to be molten hot.

Williams said moments after the defeat that he did not want to play for third place, but flicked a switch and, within 10 minutes, was raring to go again. That is the All Blacks’ way.

There have been some remarkable public outpourings of honesty and emotion from Hansen and his men this week – even that feistiest of hookers Dane Coles broke down with a few tears – as they have promised to use the hurt to fuel a big performance on Friday.

So it looks the most daunting of prospects for a Welsh team that has been struck by so much misfortune this past couple of months, what with more injuries than an entire series of ER, that it was a considerable achievement just to come so agonisingly close to making the final, losing to South Africa in their semi-final only in the last few minutes.

“We’ve punched massively above our weight,” said Gatland. “Success as a coach isn’t always about winning. I think it’s about over-achieving as a team and I feel we’ve definitely done that.”

Could there be one more piece of serious over-achievement at the end of Gatland’s remarkable 12-year reign? Or will former Wales coach Hansen finish in the grand manner with a 93rd win in his 107th All Blacks test? It should be a rare treat.

In the spotlight
It may be a long shot but Josh Adams has had such a stellar time with his tournament-topping six tries that the Welsh winger may still be dreaming of the pair that would bring him level with the all-time record of eight in a tournament, shared by Jonah Lomu (1999), Bryan Habana (2007) and Julian Savea (2015).

Eight days ago, Owen Lane was minding his own business in training in Cardiff; now the “Lane Train” is steaming in for his first World Cup match against the mighty All Blacks and looking forward to having to tame a recalled Rieko Ioane, who is itching to remind everyone why he was considered the world’s best winger for two seasons.

Team news
It is all change, naturally, for this final hurrah. Wales have lost so many players to injury before and during the tournament – Gareth Anscombe, Taulupe Faletau, Ellis Jenkins, Cory Hill, Josh Navidi, Liam Williams, George North and Tomas Francis – that there is definitely a kind of “last man standing” feel to Gatland’s selection.

He has made nine changes in all while Hansen has made seven to his starting line-up. Yet, whereas Gatland is down to the bare bones, the All Blacks coach has the luxury of unleashing some formidable, fresh weapons, such as wingers Ioane and Ben Smith in the back three alongside the brilliant Beauden Barrett.

Stats and Trivia
Wales managed an average gain of just 1.6m per carry (182m from 114 carries) in their semi-final defeat by South Africa, the lowest figure recorded by a team in a Rugby World Cup match.

Wales are seeking to emulate their best performance in any World Cup when they finished third in the inaugural edition in 1987, beating Australia 22-21.

New Zealand have won all three of their matches against Wales at the World Cup, the last time being in 2003 when the All Blacks beat the Welsh side coached by Steve Hansen 53-37.

In the RWC 1987 semi-final in Brisbane, New Zealand won 49-6 – still the heaviest Welsh defeat at any World Cup.

Quotes
“One of the things about this group of players is how much pride they’ve shown in wearing that Welsh jersey. It would be easy for us to be down on ourselves and throw in the towel but I expect these players to lift themselves, go out there and realise there’s an opportunity to do something special.” – Warren Gatland, Wales coach

“It’s about resetting the button and making sure that we go and have a performance not only we can be proud of, but every New Zealander around the world and every fan of the All Blacks.” – Steve Hansen, New Zealand coach