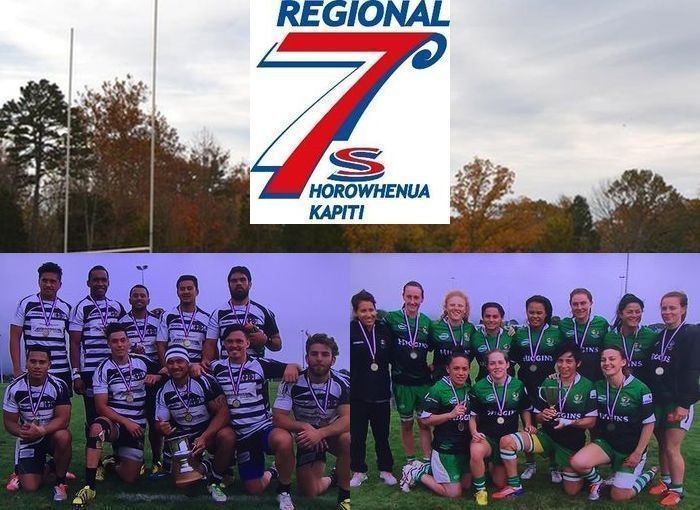 Hawke’s Bay defeated Manawatu 26-17 to claim the men’s final and Manawatu pipped Wellington 24-17 with a try on the hooter to win the women’s final.

The Manawatu women defended their title they won at this tournament last year in Palmerston North, while victory was sweet for the Magpies men’s side after they were bundled out last year by Horowhenua-Kapiti and missed qualification for the Nationals.

The five men’s teams that qualified for the Nationals in Rotorua on 16-17 January were Hawke’s Bay, Manawatu, Wellington, Wanganui and Taranaki.

Wairarapa-Bush was the surprise packet of the women’s competition, their side getting up to beat Taranaki 31-7 in the playoff for 3rd and fourth and joining Manawatu and Wellington in Rotorua in the New Year.

Wellington defeated Wanganui 46-7 in the men’s playoff for third and fourth, while defending Central Region champions Taranaki needed their 29-7 win over Poverty Bay in the playoff for fifth and sixth to make the nationals. Taranaki had lost in pool play to to both Hawke’s Bay and Manawatu.

Wellington and Hawke’s Bay had topped the two men’s pools with three consecutive wins in the round-robin matches.

The men’s semi-finals had seen Manawatu’s Vilimoni Koroi sprint 80 metres from a scrum feed to score give his side a 19-12 win over Wellington and Hawke’s Bay pushed hard by Wanganui throughout the first half before racing clear to win 19-0.

Wairarapa Bush stunned Taranaki in the women’s playoff for third and fourth by running in three unanswered tries to take a 19-0 lead late in the first half. Taranaki made a brief comeback, but the Wairarapa-Bush side kicked clear. Julie Ferguson-Ngawaka scored two tries in this match.

Manawatu beat Wellington 24-17 in a thrilling women’s final. Janna Vaughan burst through from close range with the last play of the game to complete her hat-trick and win the game for her side. Wellington, who had led 12-5 at halftime on the back of an Ayesha Leti’liga double had relinquished their lead then got back to 17-17 with a try to Caroline Sio.

Hawke’s Bay cleared out to a 12-0 lead in the men’s final against Manawatu, Penikolo Latu and Jonathan Ruru scoring early tries. Manawatu hit back with a stunning solo try to Jordan Bunce, but Hawke’s Bay captain Billy Rophia dived through to make it 19-7 at haltime. Neria Fomai scored again for the Magpies after the turnaround to make it 26-7, before Manawatu plugged the gap with a pair of tries.

Taranaki claimed fifth spot for the Nationals with a 29-7 win over Poverty Bay, following defeats in pool play to both Hawke’s Bay and Manawatu.

The biggest winning margin of the day was the Wellington women’s 54-0 win over Wairarapa-Bush , while the narrowest victory was the Wanganui men’s 20-19 win over Horowhenua-Kapiti.

The Northern Region Sevens tournament is tomorrow in Cambridge (Live on Sky TV from 12.30pm).

The two teams that won the Central Region Sevens were: